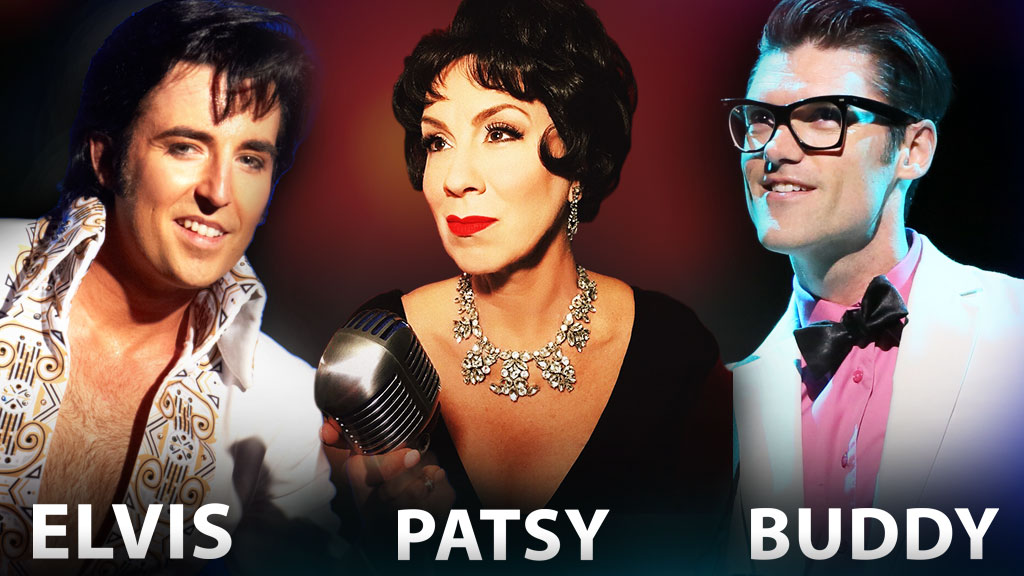 “Legends Show” brings you some of the world’s most exciting performers live on stage. Accompanied by the “Rockin’ Royals Band”, this show will feature the most incredible Tributes to Buddy Holly (Zachary Stevenson), Patsy Cline (Rebecca Poff), Elvis Presley (Pete Paquette), and a special guest performance by The Tonettes.

From the Internationally Acclaimed “Buddy Holly Story”, direct from British Columbia, Zachary Stevenson has been the starring role as Buddy Holly in over twelve different productions of the Buddy Holly Story across North America. Zachary was named one of the top ten talents to watch in the Vancouver Sun.

With her elegant gown, bright red lips, and the sultry sound, capturing the essence of Patsy Cline is Rebecca Poff. Internationally sought after singer and actor. Rebecca has performed throughout North America including New York, Chicago and Los Angeles. She performed a three month run of A Closer Walk with Patsy Cline to rave reviews and she received Patsy Cline’s husband’s seal of approval saying “She IS Patsy Cline!”.

Known as The Tonettes, Cathy, Marlene and Amoy have been blessed with power, sensitivity, and vocal energy. This sensational trio will be performing a variety of songs dedicated to the great 50s and 60s musical eras. This special performance is one rarely seen by this amazing group of singers.

Pete Paquette is a World-class Elvis Tribute Artist that is in great demand and is highly regarded as one of the top Elvis performers in the business today. Known for captivating his audiences through his incredible voice, high energy, charisma, and playful spontaneity with his audiences, Pete is an exciting performer to watch and leaves his audiences wanting more.